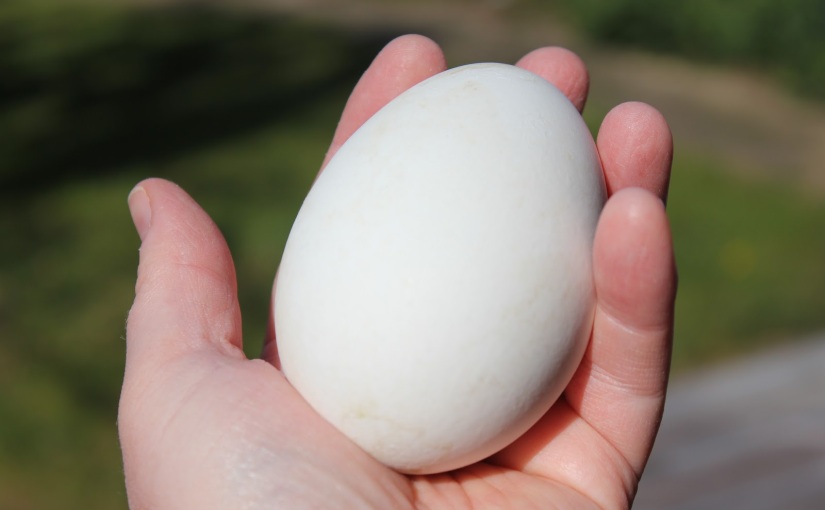 I assume you’re familiar with a goose egg, e.g. the organic vessel containing the zygote in which an embryo develops until it can survive on its own, but have you ever heard of the idiom a goose egg?

For those of you that don’t want to follow a link a goose egg basically means zero. As in I’ve got nowt.

I could waffle on about how I’ve been trying to work the idiom “a goose egg” into a poem for a while. And I have, I think I managed it a while back, but it was in a draft that may well never see the light of day—and if it does it’s only for the regulation court yard exercise that the Geneva Convention insists upon*

I suppose I can use a goose egg in relation to the number of poems I’ve written in April for #heynonnynanowrimopomo, but what would be the point in either?

Instead, I will use this weeks post to draw your (lyrical**) eye to the latest venture of Richie McCaffery. He’s posting poems every couple of days up on his blog, The Lyrical Aye

I’ve not allowed myself to read Charlotte’s poems as I’m expecting her latest book, The Girl Who Cried (and these poems are in it apparently) through any day, but was especially pleased to see new work from Matthew Paul, having loved his collection, The Evening Entertainment.

I read Ben’s, Roger’s and Maxine’s and enjoyed them immensely. Ben’s poems are new and from his new book, Hi-Viz, due out later this year. That’s suitably far enough off to allow me to read them.

Roger and Maxine are new to me, so this is all good. Matthew Stewart, I’m less sure about him..Not sure he has it in him***

I really hope Richie can maintain the work rate for this – there’s no reason why he won’t, just that new poems everyday is a hefty rate.

Obviously, you’ll know Richie is a brilliant poet in his own right, and of course you’ll be proud owners of his collections and pamphlets.

*Subs to confirm this is actually the Geneva Convention that says this.
** If you’ve got this far you’ll know by now why I did this
*** He knows I love him dearly. It’s lovely to see poems from Knives Of Villalejo out in the wild

THE WEEK IN STATS

30k running – Double last week. 15k this morning helped me find my way back..Also includes Flo’s first ever 5K. Hopefully I can pull myself back together as the weeks go by, still some faking it to be making it going on with the motivation now the Ultra is postponed..

1 Poems worked on. – Currently called Trajectory, it was called Cod Psychology for a bit. Might change again.

2 rejections – 1 from Magma (Thanks guys…Maybe tell people before you send it to print and post about it, yeah!!) and The Rialto. Quickest ever Rialto rejection. I remain undeterred.

Over 165 days now for submissions being out with Tangerine, North and Lonely Crowd. I should count from the window closing and I’m not complaining (much) about waiting, but I’d love to just know one way or the other.

1 quiz via Zoom with some mates where I learnt there are 9 ways to get out in Cricket. Don’t ask me to name them. I was pissed at this point

Still going back through old albums…via iTunes to avoid killing the wifi while streaming.

Podcasts
The Poet Laureate Retires To His Shed – Lily Cole

and of course, The Archers…(When will they mention Covid 19???)